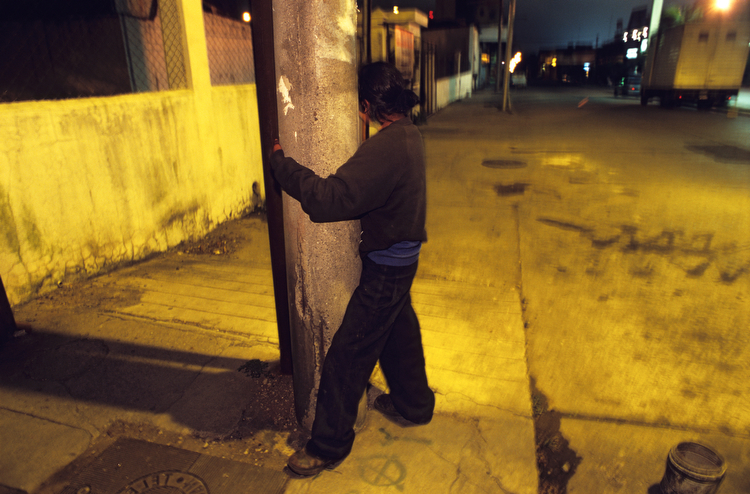 Guatemala 2001
“Rosario,” age 19, lives in the streets and sometimes stays at the Casa Alianza shelter in Guatemala City. A social worker confirmed her story, but was not hopeful that Rosario would press charges against the men who raped her.
Copyright © Donna De Cesare, 2001

“I left home when I was 7. My father beat me a lot and so did my mom.
I used to sell Chiclets and candies in the streets. Sometimes I would steal, but mostly I would beg. For a little while I was with a gang–Mara Salvatrucha. I would sell myself as a prostitute for drugs.
I used to sleep in an abandoned warehouse here. Lots of street children go there. But I don’t go there anymore because of what happened. Nine months ago I was there sleeping. The police came. It was 6:30 in the morning and they came into the building where we were. They told all the women to get up and that they were going to search us for drugs. Then they took us to the bathroom and told us to take off all our clothes.

At first I refused I told them they would not want this to happen to their own kids. But they threatened to rape us all if we didn’t do as they said. When they didn’t find any drugs they let the other women go.

Then one of them laughed in my face. He grabbed me and raped me for 4 minutes. Another cop raped my friend Jennifer who is 15.

Then they told us to get dressed and they left. A little while later they came back bringing us ham and tortillas to eat. They told us not to tell anyone and threatened us if we did.

But we told Casa Alianza. The medical exam proved that we were raped. And now Casa Alianza is helping us make a case against the police who did this to us. “