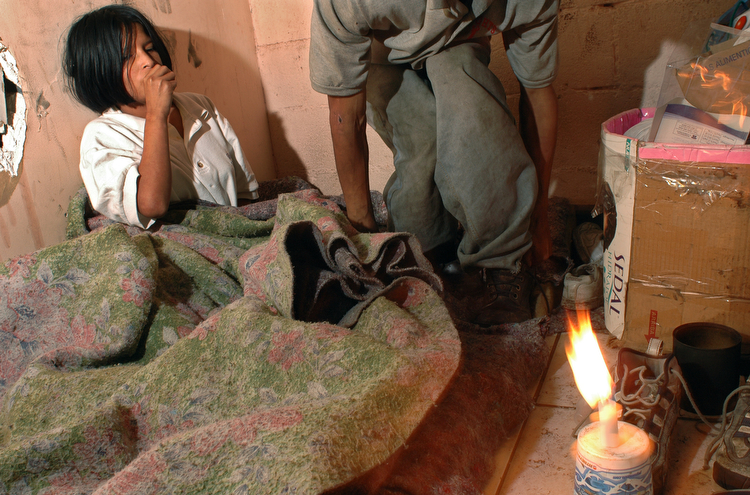 Guatemala, 2005
“Maria,” age 18, lived in this the abandoned building before her friend Ronel convinced her to move to a shelter and begin HIV treatment.
Copyright © Donna De Cesare, 2005

“I remember my papa but my mother was a prostitute. I never knew her. She gave me to my father. I had a stepmother but she beat me constantly. So I left and went to live in the streets when I was 12. My father found me and left me at Casa Alianza and told them he couldnÕt take care of me. But I didnÕt stay. I ran away to the streets.

It was a girl I met there that showed me how to get high. First I used glue later it was crack. I would beg for money. Sometimes the people would give a few coins, sometimes they said, ÒdonÕt be lazy work.Ó But I would always find someone to give me something food or a little money. With the money I got more drugs. Sometimes I would have boyfriends for drugs. I feel ashamed to say it. I donÕt even remember most of the things that happened.

Then I had a boyfriend for almost two years. I canÕt remember how old I was maybe 14 or 15 or how old he was. HeÕs the father of my baby, but we split up when Luis Alfredo was born and heÕs a year old now.

Then I met Ronel again. He was my friend in the streets before. This night he came. He wanted me to go to a shelter. He brought me there. He said I should get off drugs for Luis Alfredo. He said they would help me get off drugs and get medicine. They gave me an exam for HIV and they told me I had it. I donÕt know if Luis Alfredo has it too. We are waiting to test him soon.”

In May 2006 when I visited Maria again in Guatemala. She told me that the previous January she had run away from the shelter for two weeks. During that time she became pregnant again. She is once again living at the shelter and is following a regimen of anti viral drugs to prevent HIV transmission to her unborn child. She still doesnÕt know if her first born–Luis Alfredo– is HIV positive.