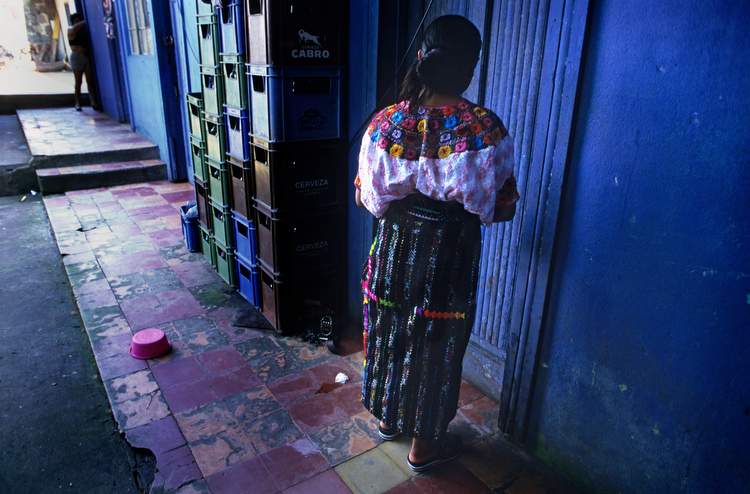 Guatemala, 2001
“Monica,” age 16, stands before the door to her room in the brothel saloon where she lives and works.
Copyright © Donna De Cesare, 2001

“I come from a very small village of peasants. Buses go there but not many. It’s a long bumpy dirt road. There is no television in my village, only the radio.

One of my uncles was in the army. But we were lucky the war didn’t come to our village. My childhood was happy I have no complaints. No bad things happened to me. Well except that my father was a preacher and he abused all the girls in my family. He was drunk most of the time and he beat my mom and us whenever he was drunk.

The first time I was with a boy it was a boy from the village. Luckily I didn’t get pregnant. My father would have killed me. I was 14. The boy wanted to marry me but I don’t want a man beating me like my father and telling me what to do. I don’t want to be married ever. I would like to have children, but without a husband. They don’t treat you well.

It was an older cousin of mine who brought me here when I was 15. I’ve been here a year and now my sister is here with me too. I didn’t know what the work was at first. They told me I was going to be a waitress. It was hard to be with these men.

But I earn 600 quetzaeles ($74.00) a month from the owner of the bar and I live here in the back. I don’t know what the men pay. They give the money to the owner and later he pays me.

My sister and I speak our language when we don’t want other people to know something. I never put on a mini skirt. I like my traditional dress.