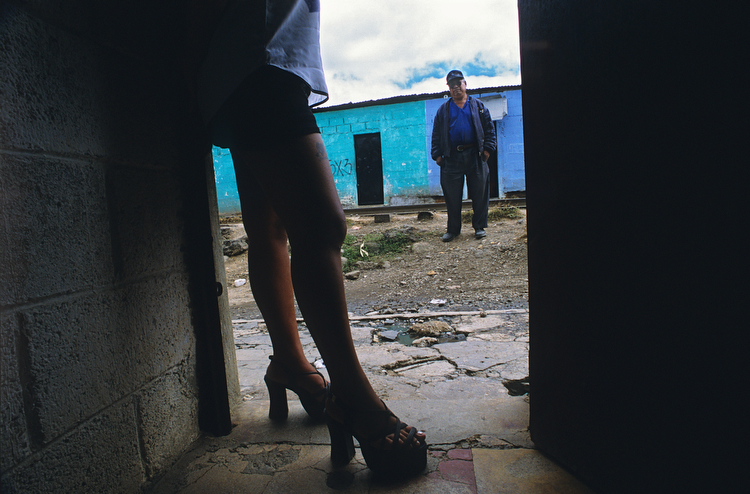 Guatemala 2001
“Cindy Paula, ” age 17 is a single mother who works in the red light district along the railroad line.
Copyright © Donna De Cesare, 2001

“I was 6 months old when my papa left my mama. She only has me now and my younger brother and sister, so as the oldest I have to help.

Right now my mom and I get along. But it wasn’t always like that. The big problem was my stepfather. He beat me and I got mad at my mom when she didn’t stop him. So I left home at 14. I started living in the streets with other kids. The streets are hard. People always want something from you. The boys all want sex. In the end they give you the cold shoulder. There are no real friends.

I tried glue and solvent at first. Then I moved on to marijuana, cocaine and crack. Sometimes I would have sex in exchange for food or drugs. I got so addicted I preferred drugs to food. Finally I ended up in the hospital with cardiac arrest. The doctor told me I was going to die if I continued the drugs. I cried and cried I was so scared. That is when I decided I had to stop.

I made friends with a woman who worked at the railroad tracks. She was 20 and she told me I could make better money than working in a factory and that prostituting was better than stealing or begging. She explained everything to me–how to use condoms, how much to charge, how to make my price a lot higher if someone looked sick or violent so they’d go away.

But someday I hope I can leave here. You always have to hide things when you work in this. If someone where you live sees where you work then they spread gossip. I don’t want my boy to grow up feeling ashamed of me.”